Skip to content
[dropcap character=”S” color=”blue”]Silverton is a city in Marion County, Oregon, United States. The city is situated along the 45th parallel about 12 miles (19 km) northeast of Salem, in the eastern margins of the broad alluvial plain of the Willamette Valley. The city is named after Silver Creek, which flows through the town from Silver Falls into the Pudding River, and thence into the Willamette River. Silverton was originally called Milford, then Silver Creek; on July 16, 1855, Silver Creek became Silverton. 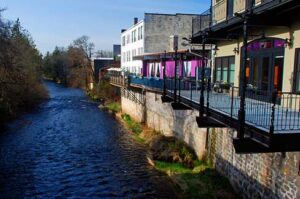 Silver Falls is the largest state park in Oregon with an area of more than 9,000 acres (36 km2), and it includes more than 24 miles (39 km) of walking trails, 14 miles (23 km) of horse trails, and a 4-mile (6.4 km) bike path. Its 8.7-mile (14.0 km) Canyon Trail/Trail of Ten Falls runs along the banks of Silver Creek and by ten waterfalls, from which the park received its name. Four of the ten falls have an amphitheater-like surrounding that allows the trail to pass behind the flow of the falls.[2] The Silver Falls State Park Concession Building Area and the Silver Creek Youth Camp-Silver Falls State Park are separately listed on the U.S. National Register of Historic Places. 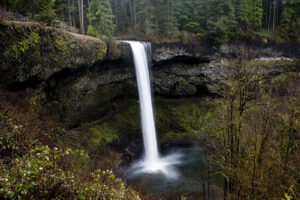 The opening of the Oregon Garden signifies the success of a partnership between the Garden, a private enterprise attracting tourists to botanical displays, and the City of Silverton. The Oregon Garden’s expansive wetlands area benefits from the city’s excess reclaimed water, while the community benefits from trade the Garden draws to the area. 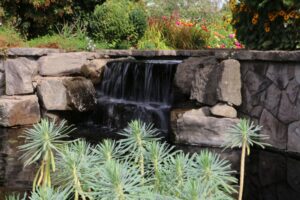