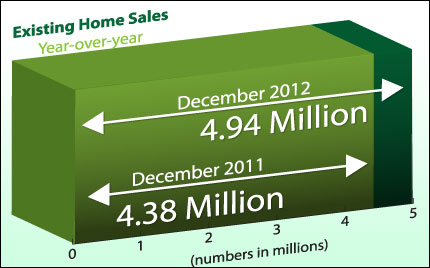 “Happy days are here again.” Milton Ager and Jack Yellen. There was more evidence last week that the housing market is improving. But not everything that happened last week was cause for song.

Last week, the Federal Housing Finance Agency (FHFA) reported that home prices rose by 0.6% in November from October, and that they are up 5.6% from the year ended in November. These numbers are based on data received from Fannie Mae or Freddie Mac mortgages. In addition, both Existing Home Sales and New Home Sales for December, though below estimates, were strong numbers for 2012.

But the housing market wasn’t the only area where we saw positive economic data last week. There was good economic news out of Germany, plus several companies here reported strong earnings, including Procter & Gamble and Honeywell. In addition, weekly Initial Jobless Claims dropped by 5,000 to 330,000 in the latest survey: this is the lowest level since January of 2008. It is important to note that estimates were used for three states, including Virginia and California, so the numbers could be distorted.

How were home loan rates impacted?

The mix of good economic news last week caused investors to move their money out of Bonds, which are considered safer investments, and into Stocks in the hopes of taking advantage of gains. And since home loan rates are tied to Mortgage Bonds, as Bonds worsened last week, so did home loan rates. But rates remain close to historic lows, and now is still a great time to consider a home purchase or refinance. Let me know if I can answer any questions at all for you or your clients.